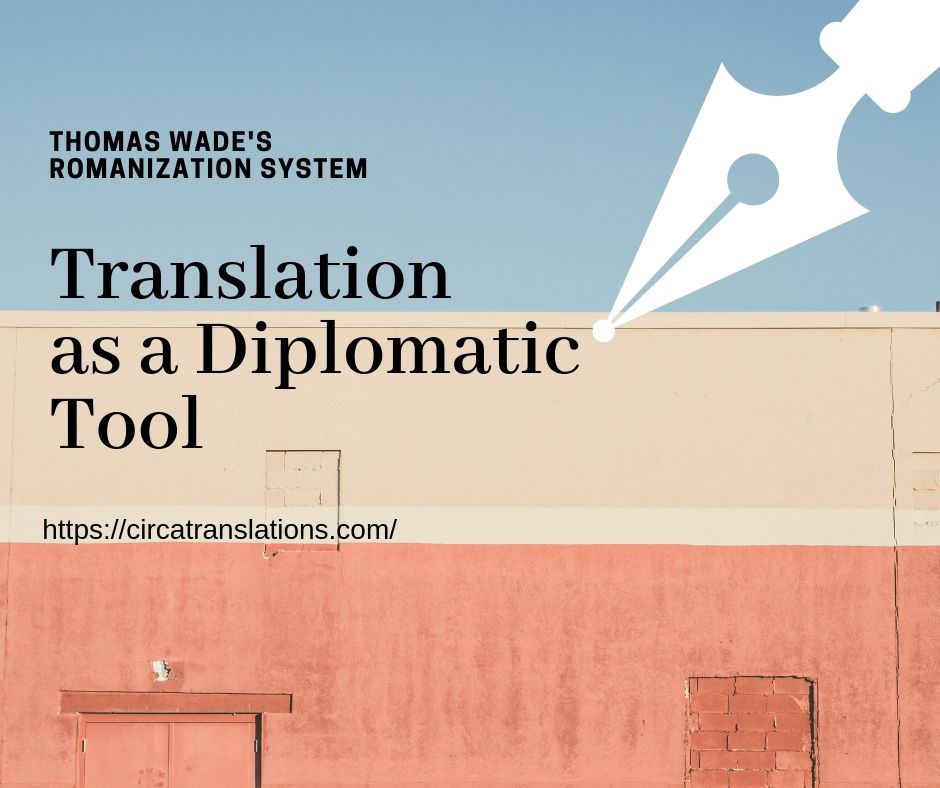 In 1842, Thomas Francis Wade was dispatched to China as an army officer and British ambassador. He began learning the language when he arrived, and during his 40 years as a diplomat between Britain and China, his language abilities made him one of the most valuable personnel in the country. Treaties were negotiated to end wars. Conventions were signed to expand trade. China and Britain were the recipients of the positive consequences of good economic and political relations during the 1880s. And the person that made it all happen had a dynamic skill: translation.

Language is a code and each locale will have its own code, which somehow needs to be made comprehensible between speakers who do not share the same language. One of Wade’s mission was to make the Chinese language writeable using the roman alphabet. A diplomatic endeavour of firsts?

What is the Chinese writing system all about?

A misconception about Chinese writing is that the symbols are a direct link between pictures and concepts. Sure, some of the characters look like what they should be representing, but as Arika Okrent explained in her book In the Land of Invented Languages, Chinese characters are made up of sound glyphs and meaning glyphs, but these glyphs are only clues that lead from an image to a word, and the concept of the word is interpreted by the speakers. The glyphs themselves do not lead to a straight and pure idea.

Take, for example, the Chinese characters for mountain and mouth. Many beginners, after learning how the meaning of these characters relate to the way they are written, fall into the trap of quickly believing that the Chinese writing system depends entirely on the relationship between pictograms and ideas.

Some Chinese characters, such as the above, fit neatly into the teaching strategy of getting learners to remember the characters visually.

But, life was not meant to follow rules. The students then move onto words with more abstract concepts such as boy, good, and my personal favourite, mother, which is a character that can be quite nicely broken down, but if you analyze all the elements, it has nothing to do with the noun mother.

Things start to get muddy here because once you move on from concrete concepts to abstract concepts, the characters no longer look like what they are describing. Boy is written with the characters farm and strength because during the agricultural days in China, only men worked the farms and they needed to be strong to do so. Good is a combination of woman and child because the concept of goodness (in Chinese mentality) is associated with woman and child. How about the character for mother? The woman character is used because mothers are biologically female, but the horse character is taken only for its sound, because mother and horse are pronounced similarly in the different Chinese dialects.

As Arika Okrent elaborates further in her book: “The connection between form and meaning makes sense only after they have been explained…”.  Meaning through symbols are not universal.  Each culture will have different interpretations, different ideas of what the symbols mean. The Chinese writing system was invented thousands of years ago, and the sounds and imagery associated with certain characters have changed over time. But what about pronunciation? Are the characters pronounced the same way in the myriad of dialects that exist in China today as they were in the past? Absolutely not.

The pronunciation of the spoken language would have changed, rendering the “sound”  aspect of the glyphs harder to discern, and the imagery in the glyphs would have     become more stylized and harder to recognize. The sound and meaning cues would     have gotten weaker and less helpful. People would have had to resort more and more   to just memorizing the glyphs. Imagine this scenario and what you end up with

Language is continually undergoing changes to its writing and pronunciation system. It is constantly evolving and morphing according to the way speakers use them. Therefore, a Chinese word depicted as it is now, probably had a different concept and imagery when it was first invented, and without the proper context, the correct meaning can be extremely difficult to decipher.

What’s all this got to do with translation?

Translation is already difficult task unto itself. Combine translation with deciphering various meanings inherent in Chinese characters — and a competent human translator becomes indispensable in the process. Thomas Wade’s romanization system helped with transliteration, but it wasn’t quite translation. Being able to produce the sounds as indicated by the syllable markings over the roman alphabets, could only lead the speaker to deduce what the word might be. The pictographic representations of Chinese characters are only clues that take the reader from sounds, to a word, and from words to meaning—but each reader will interpret the meaning in their own way. Transliteration is merely a pathway to translation. Machines can follow the path and produce a comprehensible translation, but it’s the human translator who will orient the machine and help it to decipher essential characters in order to produce a meaning-rich product.

What has Wade’s romanization system done for the world?

Thomas Wade romanized the Chinese writing system, which allowed the language to be transliterated into other languages such as English, Spanish, Turkish, Danish, and a few more others. His works on providing a pronunciation table based on standard Beijing Mandarin dialect was the foundation for Herbert A. Giles’ (a fellow scholar on the Chinese language) Chinese-English Dictionary, published in 1892 to train expats living in China to speak the language. It was later known as the Wade-Giles romanization system, which China used until 1979, before the country replaced it with its own Pinyin romanization system. Eventually retiring to Cambridge and becoming a professor of Chinese at Cambridge University, Thomas Wade wrote several textbooks on Chinese culture and donated many more to the university after his death. His accomplishments as a teacher and diplomat is a reminder of the important human element required in translation to help spread peace, expand trade, and build international relations. But his true gift to the world, was providing a tool to understanding the fascinating concept of how the world could be perceived through meaning-rich symbols.

Okrent, Arika. In the Land of Invented Languages. Spiegal & Grau, 2010.